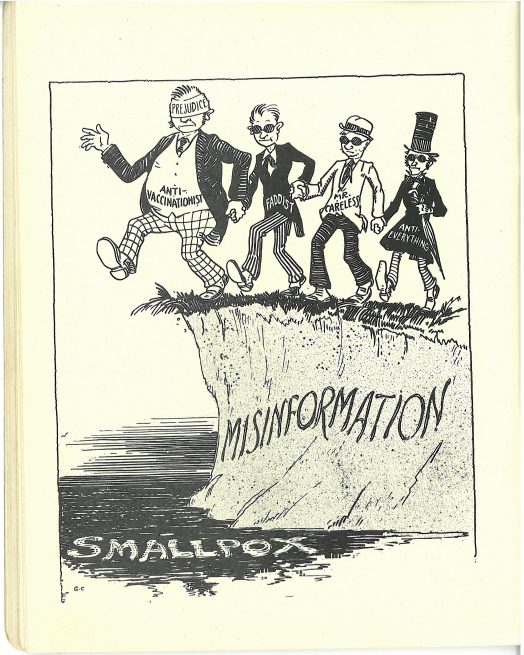 This comic is from 1930 and about the smallpox vaccine, but it is also 100% from this past year and about Right Now. (The second guy is labelled “Faddist,” which Snopes explains is “a largely archaic word that describes people who turn to alternative or niche health trends, especially diets, in a way that neglects or contradicts mainstream scientific advice.”  i.e., anyone taking horse dewormer or insisting on hydroxychloroquine while rejecting the vaccine.)

Just a brief reflection on First Days at school. I wrote this back in 2017, when my youngest began kindergarten. I posted it now, because after 406 with no in-person school, it’s taken me a month to process that her first day of the school year came and went without dire consequences.

Tuesday was my daughter’s first day of kindergarten. At 4:20, when her bus finally arrived, she didn’t get off.

The driver checked, first calling out from the front, then shushing all of the kids and calling out again, then finally going seat to seat down the length of the big yellow bus.

My daughter wasn’t there.

It goes on from there. And, no, I have no clue why I chose to defame Mitch Albom in the title of this pieces. I never mention him in the entire essay. He must have just pissed me off that day. Dude does that.

This is a real illustration for a real patent really filed by (and granted to) Eddie Van Halen—yes, that Eddie Van Halen of the band Van Halen, may his memory be for a blessing.

(FUN FACT: The above video has not “aged poorly”; it was exactly as offensive in 1984 as it is today. Also, still hella catchy.) 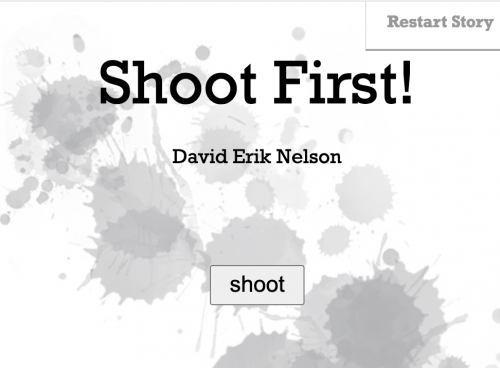 I’ve added a new interactive fiction, “Shoot First!“, to my Patron’s Only Digital Vault. For as little as $3 patrons get immediate access to all the goodies in the Vault, including an analog horror film, audio books, new fiction and music, interactive goodies, etc.

Check it out on Patreon: https://www.patreon.com/DavidErikNelson

In order to rein in the ads and “Promoted” posts in your Twitter feed, you need to uncheck all of your “Interests” in the Ads preferences section of your Settings. This list is usually in the hundreds, if not thousands—and each item must be manually unchecked. ☹️

This script helps enormously: Automatically Unchecking Twitter Interests. I found changing the timer from “100” to “3000” was the sweet spot where it was working through these checkboxes in decent time, but not triggering a whole bunch of 500 errors or hanging up.

The question for me is this: Does Facebook provide anywhere near the social value to justify what this man suffered?  Does it provide enough value to justify the suffering of the likely thousands of workers who Facebook employees to protect us from Facebook?

As you reflect on this, you probably want to check out The Facebook Files, an ongoing investigative series from the Wall Street Journal (articles are paywalled, but the related podcasts are free and worth your time and attention).

Brass tacks question: Given what social media companies like FB can and will do, in terms of exerting editorial control when it is in their interest to do so, I’m left wondering if they really deserve Section 230 protection?

FB, of course, is far from unique here—or, maybe, is uniquely awful only in the magnitude and clarity of their disfunction and viciousness.  For a Twitter-centric rumination on the fundamental design aspects of social media that are making it so damaging to both individual humans and larger human societies, please read Noah Smith’s rational (and, in the case of the later, research-backed) articles “The Shouting Class” and  “The Shouting Class 2: Last Refuge of Scoundrels”:

“In other words, society has always had about the same number of shouty jerks. But with the rise of social media, we have moved our society’s political discussions from spaces in which the shouty jerks were at least somewhat marginalized and contained to spaces that preferentially amplify their voices.…In pursuit of personal glory, bad people turn neighbor against neighbor.”

Noah Smith in “The Shouting Class 2: Last Refuge of Scoundrels”

Holy shit! This story! It is extremely worth your time and attention.

“The Human Chair” by Edogawa Ranpo, translated by Allen Zhang