If you like the sorta weirdness I peddle and wanna make sure more of that happens, you can support me via Patreon. Folks who give just $3/month (or more) get full, immediate access to the growing “Digital Download Vault.” The Vault is chock full of previously unpublished stories, music, and other goodies that can be shared via the magic of electromagnetic radiation.

(If you’re especially frustrated with the current President and White Power™, you’ll especially like the longest of these goodies, my novella “And Lo She Dwelt in the Great Sadness.”)

If you wanna drop some coin in my heavenly jukebox, but don’t wanna do so recurringly, you can always send coffee/beer money to me via Venmo or ko-fi.com.

And, if you wanna support me, but don’t have the scratch to spare—well, don’t doubt that I too have been there, brothers and sisters.  It’s fine to just spread the word: Tell folks you like about stuff I’ve done that you like, point them to my free fiction, share a link to a post I wrote that you dug, or speak kindly of me on Amazon.

Once again, thank you so much for supporting our special kinda weird.

This all might be old news for you—especially the bit I shoved in the title, as I’m told that finding actually saw a fair bit of press earlier this month—but I found this all eye-opening:

1. This single factoid on the impact of tiny wage increases on suicide rates is pretty stunning:

At the bottom of the income heap, relatively minor adjustments in pay can yield such a dramatic difference they register as public health benefits, according to the second study, published in the Journal of Epidemiology and Public Health. That paper found “state-level increases of $1 in minimum wage corresponded with a 3.4 percent to 5.9 percent decrease in the suicide rates of people with a high school diploma or less” among 18- to 64-year-olds

Picking that rather tortuous second sentence apart is a little tricky. Americans 18- to 64-years-old account for something like 200,000,000 people. About half of them would probably fall in the “have a high school diploma or less” bucket. So, this group—less educated American adults of working age—amount to something like one-third of the country. But they make up something like 70% of our suicides. So, that’s a population that’s really hurting, to the tune of more than 30,000 suicides per year. If you reduce that by an average of a 4.7% (as the above mentioned study found), that translates to ~1,600 lives saved.

That’s good. I don’t think anyone reading this is going to say “Thousands of families kept whole? Fuck that, Dave: Let them choke on cake!”

But what’s the cost? I mean, maybe it costs some absurd amount to get this done, and there’s a legit question if it’s a good investment or not.

Minimum wage is still pretty insanely variable across the US, but it looks like the average US minimum wage worker earns $11.80 per hour (given how the population of working-age Americans is distributed). That being the case, a $1 raise amounts to an ~8.5% increase in payroll. If that’s entirely passed directly to consumers (with all else staying equal), you might end up paying as much as 25 cents more for a Starbucks coffee, or almost 70 cents more for a Bacon Turkey Bravo sandwich at Panera.

That’s literally pocket change. It seems like a pretty frikkin easy way to save 1,600 lives each year. I say let’s do it.

2. Even 1%ers struggle with medical bills‽

“Among low-income households, for instance, nearly 40 percent said they had trouble paying their medical bills in the past several years and 30 percent reported having difficulty paying for food, Ingraham writes. “Among the top 1 percent, those shares were 5 percent and zero, respectively.”

I’m sorry, put we’re talking about the handful of families that have more than half the nation’s wealth—and even they can’t all cover their medical expenses? That right there is the single most persuasive argument I’ve ever heard for socialized medicine.

3. This all translates to a significant Democratic tailwind in the presidential election. Our economy is doing great—which historically gives an incumbent PotUS an easy win for reelection. But that great economy is only benefiting a small group of people in the upper reaches of the wealth curve. They’re happy and they vote—but they each get just one vote.

Meanwhile, huge swaths of Americans are “dissatisfied” (or much, much worse)—and don’t tend to vote. Get more of these less-likely voters to the polls, the Dem advantage increases (incidentally, as voter turnout increases, policies tend to get more progressive, too—BONUS!).

This all points to the one thing you can do if you want to see a Dem in the White House: Work to increase voter turnout. Get folks registered. Get them to the polls. Get them their absentee ballots.🇺🇸

Related: I keep this on a sign hanging above my desk, because while most truths are indeed self-evident, most of us need frequent reminders about obvious things; this is just such a thing. Consider this a #PRO-TIP.

Here’s how much America’s billionaires give to charity, in one chart

…and saw the chart: 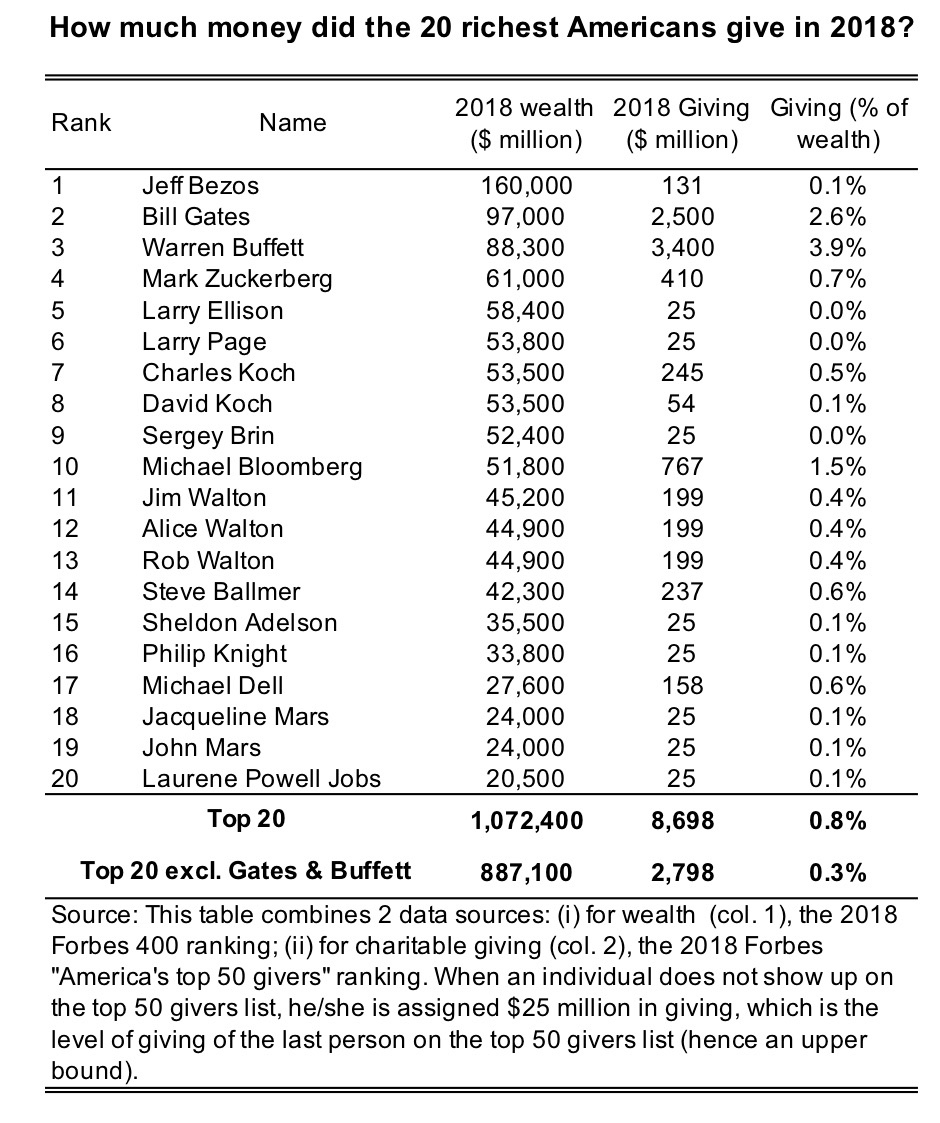 And then did some math:

The “average American” (that’s a family making $50k–$99k in this article here) gives ~3–6% of their income to charity each year. Now, that’s income, not wealth. If we want to apples-to-apples this, we need to gauge giving vs. wealth. It appears the “average” American’s wealth is something like $97,000  (which kinda sucks, given that the average American home is worth more than twice that—and is mortgaged to the gills).  So, we end up in about the same place: The average American annually gives money worth ~3% of their wealth.

In other words, the average American is significantly more generous with their wealth than pretty much every goddamned billionaire out there.  Even Warren Buffet (who I actually really admire) is just a tiny bit above average on this one.

So, if your argument against a wealth tax is “It’s OK for folks to sit on billions of dollars, because rich people are super charitable”—well, they just aren’t. In fact, multiple studies have found that as folks get poorer in this country, they give a higher percentage of their income to charity (and generally have zero or negative wealth). People at or below the poverty line often give ~10% of their annual income to charitable causes each year.

So, yeah, give thanks on Thursday, sure—but give some fucking money, too, dammit.

This video is mostly narrated by Dr. Robert Cialdini, who’s most famous for his book Influence: The Psychology of Persuasion (where he first presented most of the ideas seen here).  This is a text book—if not the Bible—on how to talk to people about things that you really care about, and get them to see your perspective.

Cialdini started out as a research psychologist, and my understanding (which fits the tone of the book) is that he began working on the book—which catalogues and examines several categories of sales/influence tricks and techniques—as a sort of warning to lay folks. After its first publication, it became enormously influential among marketers, copywriters, businessfolk, and all manner of modern propogandists.  If you write for any purpose (e.g., speechs, op-ed, news, fiction, non-fiction, persuading folks on the fence to vote for this or that) or run any sort of business, you need to read this book.  For that matter, even if you don’t seek to persuade anyone of anything, I still strongly recommend every adult in America  read this book, in order to better understand how it is you’ve come to believe what you believe, embrace what you embrace, and reject what “just isn’t your thing.”

(While we’re on the topic, you really should also read Darrell Huff’s HOW TO LIE WITH STATISTICS; the black arts outlined in these two books cover the two major toolsets that the politically and economically motivated are using to manipulate you and your loved ones every single day.  Get your hands on Master’s tools; consider their possible applications in tearing down Master’s house*.)

Caveat: Yes, some of the hard data and studies in the original Influence haven’t aged well, but the bold strokes—about how people behave and how our minds get changed without our realizing it—is still rock solid.

BONUS: Check out this analysis of Oprah, and compare it with what Cialdini describes above:

END_OF_DOCUMENT_TOKEN_TO_BE_REPLACED 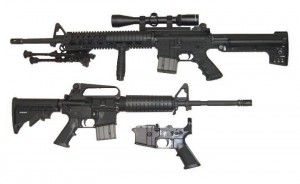 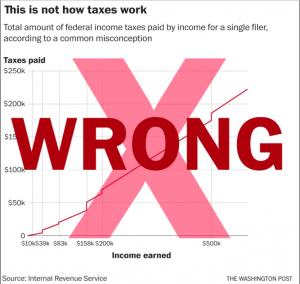 Not for nothing, but I’m not a huge fan of Black Friday/Small-biz Saturday/Cyber Monday/Giving Tuesday/etc.  Yeah, there’s power in focusing our economic force on these specific days (obviously)—but also, there’s power in you just spending money on what you want when you want it.

Anyway, I love the denim from these cats in California, Brave Star.  The cuts work for my particular body, the construction is quality, and the materials a delight (more of my thoughts on Brave Star—who, incidentally, are still using some of the final bolts of historic Cone Mills denim I mention in the post at that link).

If you wanna give them a whirl, you can save $10 on dope-ass, sanely priced, all-American-made denim with that link. (DISCLOSURE: If you use that link and coupon code you save $10 and I get a $10 credit.  FURTHER DISCLOSURE: These are basically the only pants I wear anymore. I’m wearing a pair of indigo x brown Cone Mills selvedge Slim Straights right now, although my favorite are the various blacks. They are all good jeans.)