A while back C.C. Finlay interviewed me about my latest story for The Magazine of Fantasy & Science Fiction, “All Hail the Pizza King and Bless His Reign Eternal.” That interview is now available online, for folks curious about how and why stories like this get written.

F&SF: What made you decide to write this story right now?

DEN: I didn’t. I actually wrote this back in early 2018, completing the draft in just two weeks (which is maybe a record for me). But it didn’t really become the story it is now until late that year. I listened to every word of Christine Blasey Ford’s congressional testimony—which included her detailed account of being sexually assaulted by Brett Kavanaugh (who now sit on the US Supreme Court) when they were teens. I was in the kitchen, puttering, and something she said somewhere in the middle of her testimony stopped me dead, because it was a near perfect poem just as she spoke it. A poem like that, one spoken accidentally, hits you like lightning. It stops your heart. I wrote it down right then…

…And that’s when I understood what this story was really all about. It was a different story after I heard that poem, and so I rewrote it to be that story.

…and it goes on that way. Read more: Interview: David Erik Nelson on “All Hail the Pizza King and Bless His Reign Eternal”

… My time portal novel is now on Amazon (print and ebook). It’s a giddy little thrill at a reasonable price.

I’ve read a million time travel stories… and even read a million variations on time travel stories that try to be “different,” but I don’t think I’ve ever read any that are different in quite this way. While it settles uncomfortably next to very serious and even tragic things, the story’s humor is quite pronounced. … And it does an excellent job of creating an air of danger, and thus interest, due to the well-realized sense of actual traveling in (and perhaps getting lost in) time, as well as the criminal aspect and what they’re doing to the people in the past and how those people might react. It’s also a good vehicle to address issues all the way from existential bad faith to religion possibly being the amphetamine of the masses.

—about some folks who really can’t leave the house:

I mention this now because I just learned that Audible is temporarily bumping artists’ royalties—which is nice, as I used their service to produce the audiobook of There Was a Crooked Man, He Flipped a Crooked House (voiced by the inimitable David Sadzin).

You can buy the audiobook directly on iTunes and Amazon, or get it as a freebie with a one-month Audible trial membership.

If you’ve never tried Audible before, it’s actually pretty sweet—I used it for years when I used to commute. These days, your monthly membership gets you a full-length audiobook and two Audible Originals each month.  The first month is free with this link (here’s a UK-specific link, for those who need one). The thing that astounds me: Even though I haven’t been a member in more than 13-years, I can still access all the stuff I got through Audible back in the day—i.e., you really do have lifetime access.

If audiobooks aren’t your thing, you can also, of course, get the book on Kindle or as a paperback.

[UPDATE 2019-11-25: I just saw Paul Di Filippo’s review of this antho for Locus, and so added a snippet of that below, because it’s insanely kind and flattering and I wanna crow about it.]

It feels a little odd to be a “new voice” in anything with so little hair atop my head and so much grey in my beard—but I’ll take it!  The publisher has been kind enough to include a section of my story “In the Sharing Place” to whet your appetite (here’s a link to all five previews stories).  Enjoy!

The New Voices of Science Fiction (from Tachyon Press)

“Reminiscent of the weirdness of Ben Marcus’s The Flame Alphabet, “In the Sharing Place” by David Erik Nelson chronicles in vivid surreal fashion a post-invasion, post-collapse world where psychological counseling takes on dire new facets.…this is a killer collection, full of top-notch stories beautifully written and invested with much care, compassion and thought …Deploying the toolkit and concerns bequeathed by their literary ancestors, they are extending the reach of the genre not by plowing under everything that was built before and salting the earth, but by erecting new superstructures on old foundations—or perhaps new eco-communes in the shadow of dinosaur cities. It’s the way the field has always moved forward, and this volume gives plenty of hope that the future of future fiction is in good hands.”—Paul Di Filippo, Locus Magazine

“While readers may be familiar with many of the names and individual works here, having them together in one volume creates a stunning set of sf shorts. Highly recommended for all collections.“—Library Journal

“There are also stories that present unique dystopias such as the mist-haunted New York in Jason Sanford’s ‘Toppers’ or the mysterious outside world in David Erik Nelson’s ‘In the Sharing Place.’”—Booklist

“After some kind of alien invasion/apocalypse, children try to come to terms with the loss of their families ‘In The Sharing Place’, a thoughtful and ultimately a chilling story by David Erik Nelson. Much of the narrative takes place in the therapy sessions that happen in the Sharing Place and only slowly are details of the apocalypse revealed. It’s a very effective tale.” SF Crowsnest 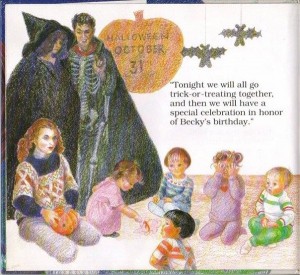 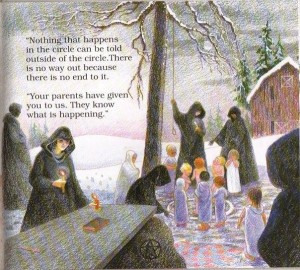 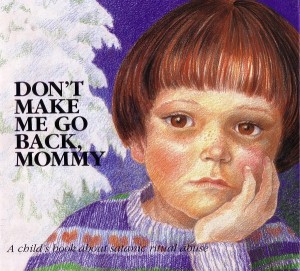 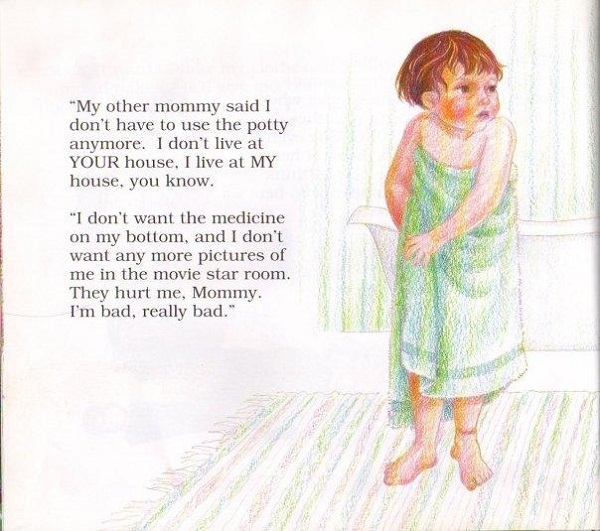 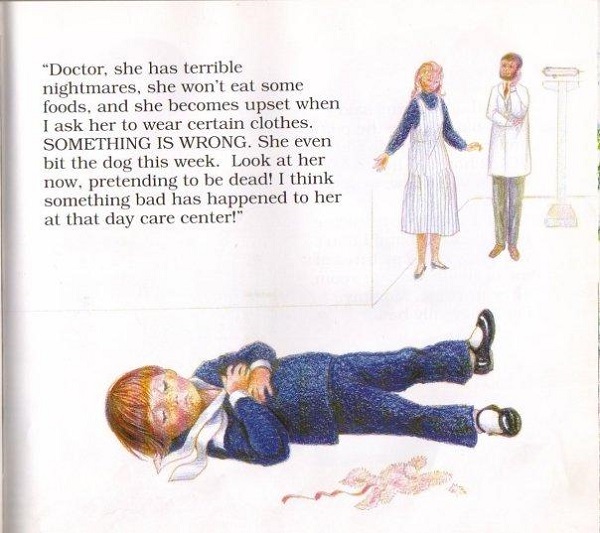 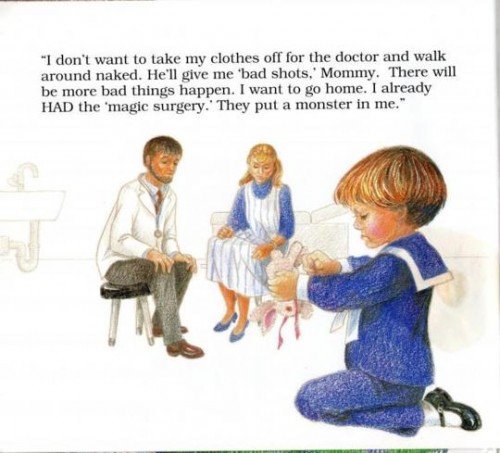 Just a quick heads-up for folks in Michigan: I have two events next weekend! Please spread the word, cuckoo bird!

I’ll be reading from my book There Was a Crooked Man, He Flipped a Crooked House at the Grey Wolfe Scriptorium bookshop in Clawson, MI on October 27. Details:

I’ll level with you: This is going to be a hoot. It’s a good book, it reads well, and I’m moderately hilarious.  I’ll bring snackies of some sort.

Nonetheless, I’m totally dubious about my capacity to draw an audience.  Therefore, I’m running two contests(!!!) associated with this event:

2. Good Noise in the Loud Lab!

On October 28 I’ll be the featured artist in the Sonic Workshop at the Ann Arbor Hands on Museum from noon until 4pm . I’ll be running my “Loud Lab,” which includes a special installation of the Slinky Sound Forest, weird homebrew instruments and freak-out noisetoys you can rock out on, and an opportunity to craft your own weird noise-music-thingies under my dubious tutelage.  Details:

Hope to see you next weekend!

The annual “spooky” issue of ASIMOV’S Science Fiction (Sept/Oct 2918) has hit newstands, and includes my apocalyptic sf/horror story “In the Sharing Place.” Enjoy!

Dove into the new issue of @Asimovs_SF last night, and read “The Sharing Place” – an absolutely heart-stopping and eye-opening (in more than one way…) #scifi/ #horror story by @SquiDaveo. I blame any weird dreams I had last night on this story… https://t.co/mkvR7UDeSlpic.twitter.com/MiJH6Q6RB6 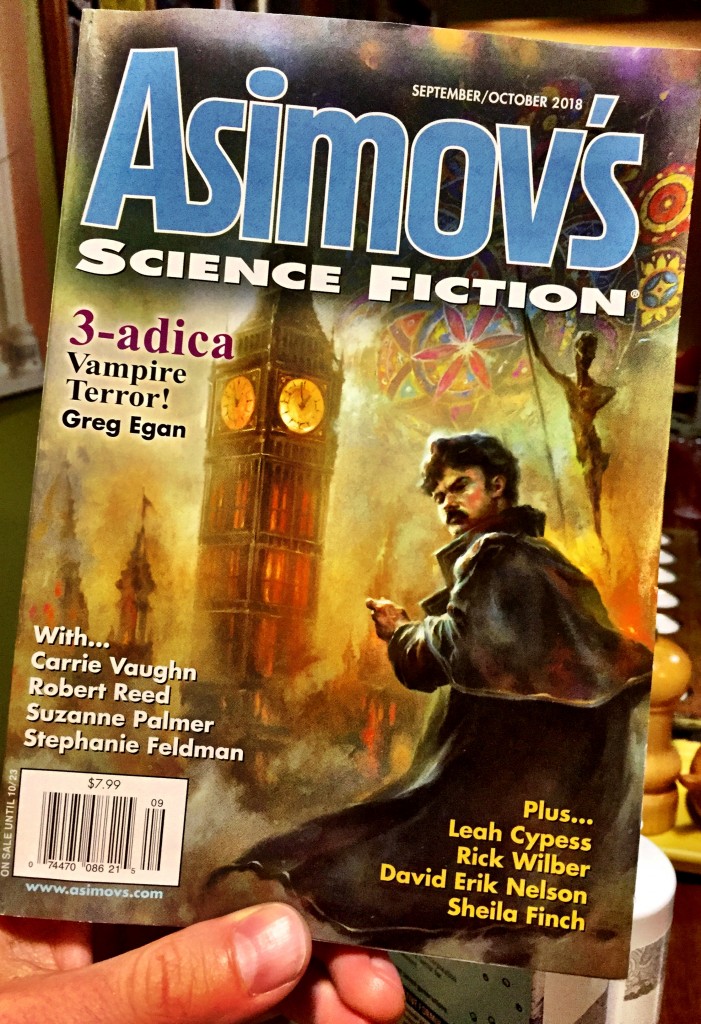 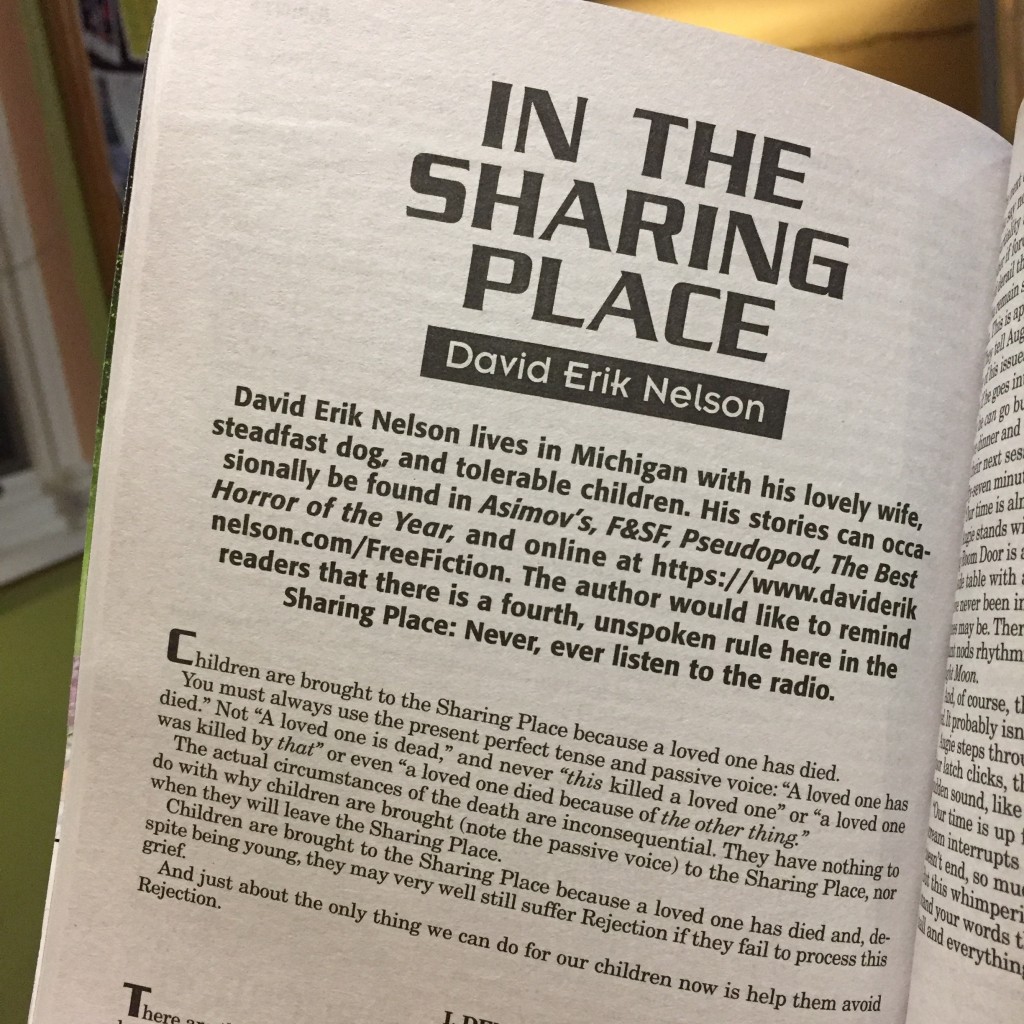 I love hearing from folks who read my DIY books, because they are always up to something that I never imagined, and yet love on first sight.  Case in point:

Last December I got an email from Hamish Trolove, a Junkyard Jam Band reader who mentioned he was building his own riff on a Shane Speal 2×4 lap steel with a build-in Mud-n-Sizzle pre-amp (project 12 in Junkyard Jam Band) and dual LFO box (translation: It’s a junkyard lap steel electric guitar with a built in pre-amp—so things might get loud—and an automated modulator, allowing him to dial in anything from a little honky-tonk tremelo shimmer to a big pulsing metal wobble).

The instrument uses waste cargo palette wood, and TIG welding wire to mark the “fret” spacings. I find that old palettes often have extraordinarily hard wood with some amazing colours when planed down, sanded and varnished. Hopefully by the end of the project I’ll have something that looks fairly tidy-ish in a hobo/steampunky kind of way.

“Fairly tidy-ish” is such an understantement.  Check this thing out: 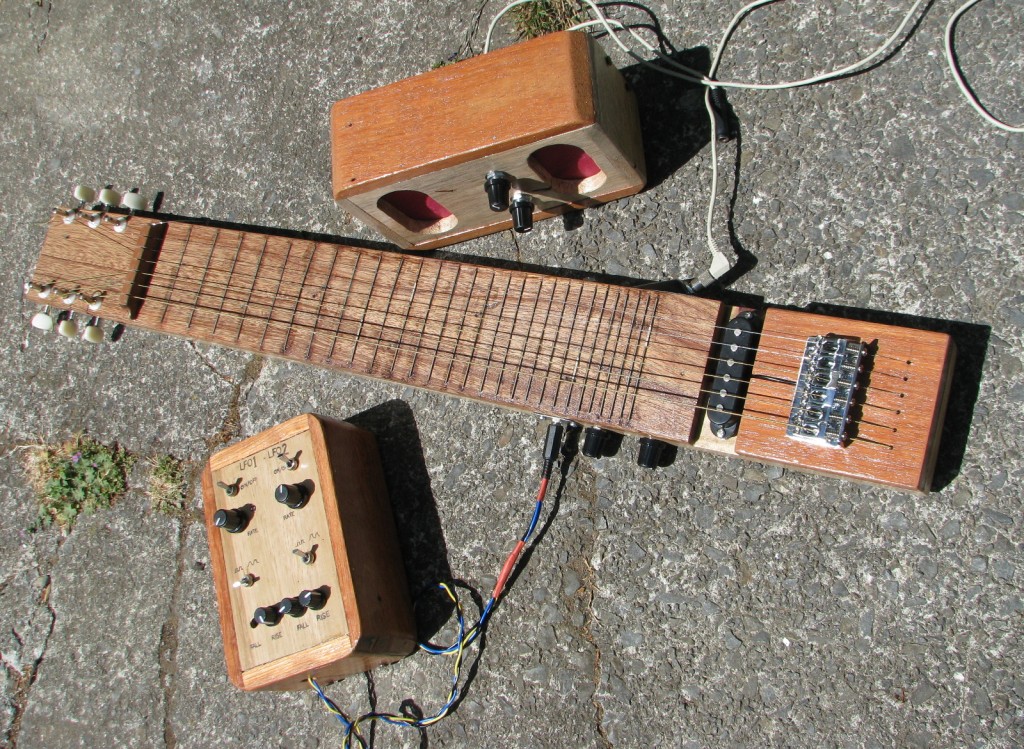 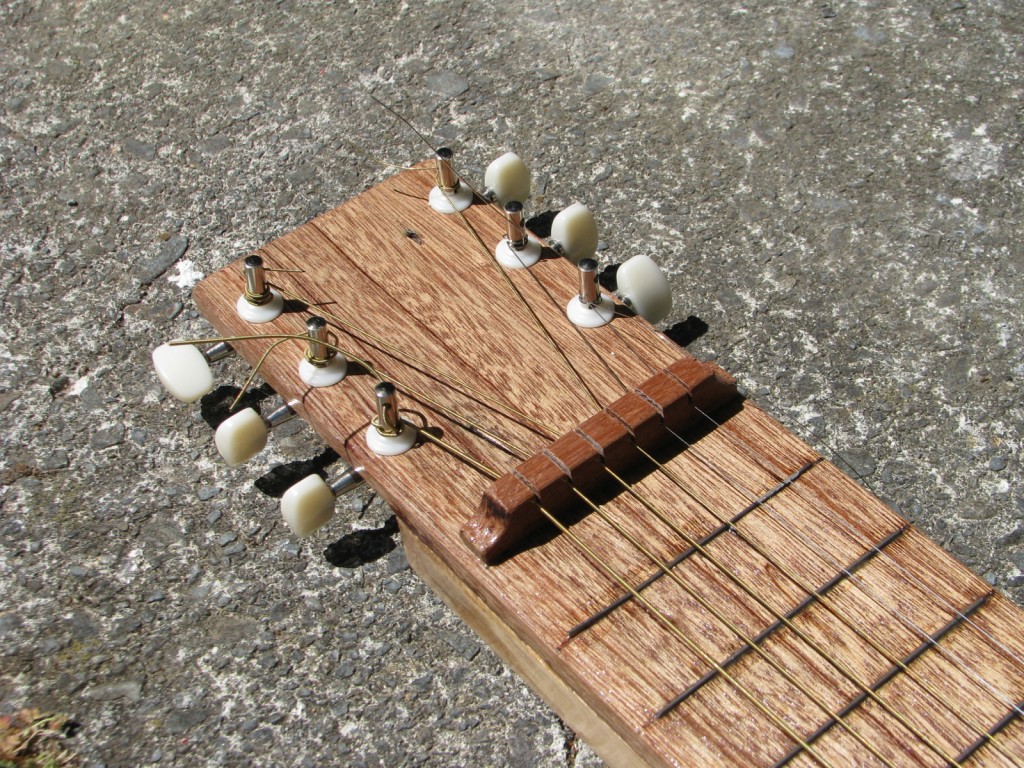 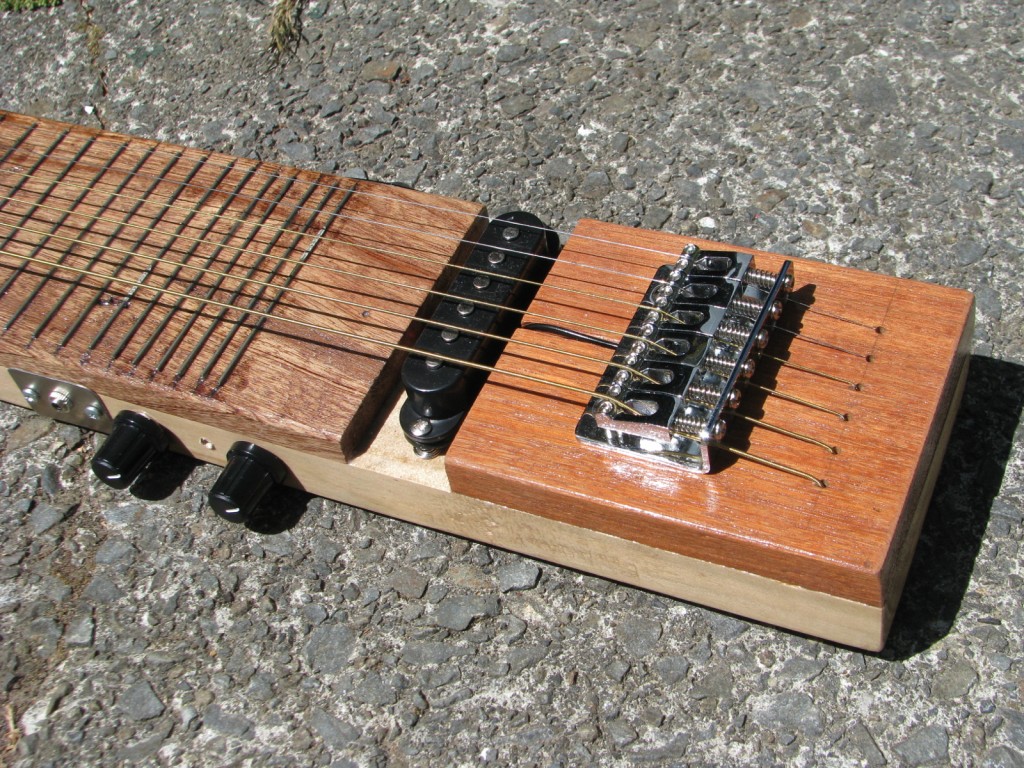 Oh daaaaaaamn! I love everything about this!  He also included a schematic of his expansion of my old Universal LFO (Junkyard Jam Band project 13), for folks interested in doing something similar:

Hamish also put me on to Frescobaldi, a powerful, pretty, and free sheet music text editor that looks amazing. (For every 100 of you who are wondering why you’d ever need such a thing, there is one musical geek who is gonna click that link and weep with joy.  Trust me, for I have been that very geek.) 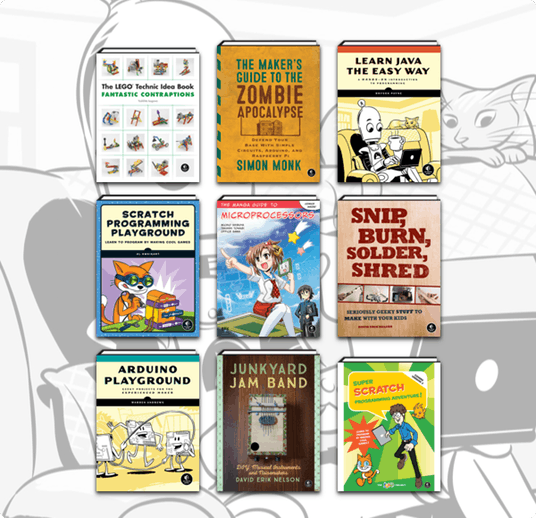 … while supporting Art, Free Speech, and other Good Things™

Check it out: Humble Book Bundle: Makerspace by No Starch Press (pay what you want and help charity)

(Need details? Here’s my spiel from a week ago.) 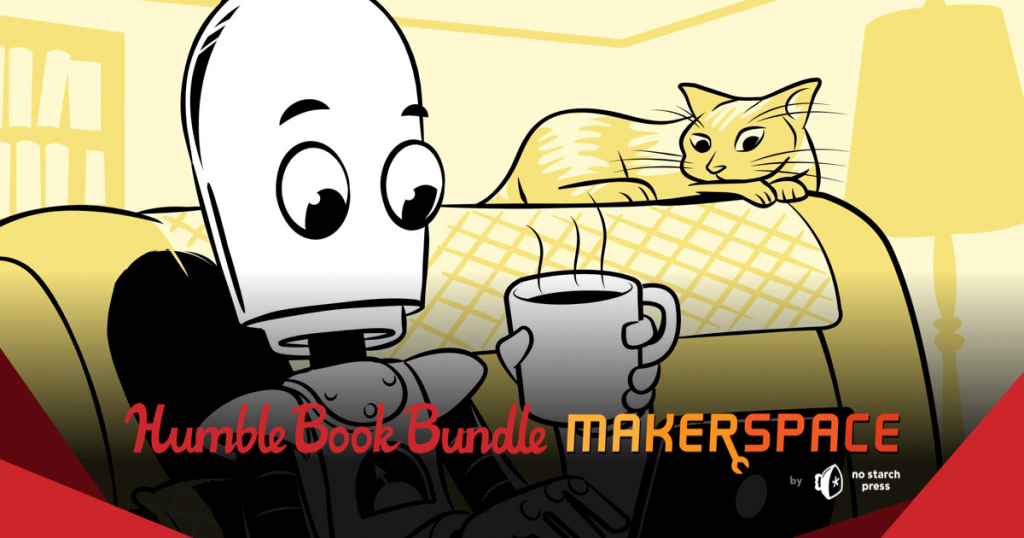