. . . but we were busy delivering this awesome new product!!! 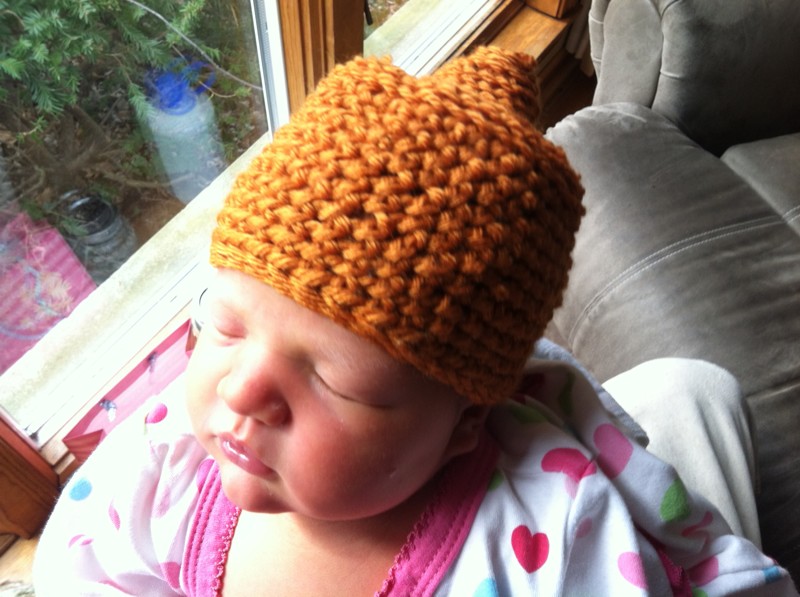 (The baby is the product in question, not the hat; I also made the hat, but we’re mostly psyched about the baby who’s wearing the hat. The hat, though, I’m still happy with the outcome on that. It’s a good hat.) 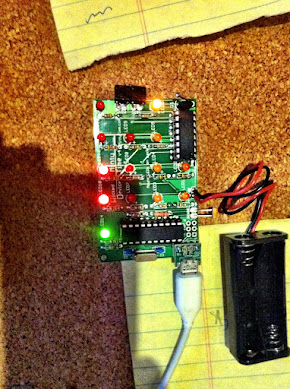 My wife gave me a Wicked Devices MintyTime kit for Non-Denominational Gift Giving Holiday. It’s a great lil project, well within the reach of anyone with basic soldering skills and a steady hand. The instructions are clear (although, I swear to God, there’s no mention of placing resistor R17 on the board–I missed the damn thing on *two* separate builds of this kit [more on that follows]). Conclusion: A fun, geeky project with attractive result and a graceful design; recommended for anyone with basic soldering skills, or more advanced hobbyists who want a very tidily executed binary clock.
That said, what really pleased me was Wicked Device’s excellent customer service. After I built my first MintyTime, I discovered that it was keeping terrible time (loosing several minutes from every 24 hours) and burning through batteries like a lunatic. In fact, the behavior was *exactly* as bad as the extreme beta version they describe here (scroll down to point #4 on “Keeping Good Time”), back when they were trying to use the chip’s (crappy) onboard RC oscillator rather than a dedicated crystal oscillator.
I emailed Wicked Devices and got a reply that same morning. Evidently a chip with the old software had slipped in among the current batch. Vic was happy to reburn it for me. Unfortunately, I hadn’t socketed the chips when I built the kit (contrary to *my own damn advice!* Always socket your chips, kids!), and drove myself nuts trying to desolder a 16-lead DIP without destroying it (which is basically impossible with a standard soldering rig). I shared my grief with Vic, who suggested I mail the finished project to them, and they could reburn the chip onboard–which they did. Then the damn thing got lost by the USPS on the return leg, and so Wicked Devices sent me an entirely new kit *plus* the an extra little jumper board and jack so that you can run the clock off of a USB wall-wart instead of batteries.
The new clock runs *perfectly*: not a lost minute over the course of *weeks* of operation.
So, the final verdict: This is a good project from a great company; totally worthwhile purchase or gift.
[FYI: I’ve mounted the LEDs on the “wrong” side of the board here for my own aesthetic reasons.]