My family gave me one of these Back to the Roots oyster mushroom kits for Father’s Day this year. I was not initially impressed: I babied the damn thing for a month, and got *nothing*; not a single damned filament of mycoprotein. Pissed off, I ditched it onto on my office desk down in the basement with the conviction to write a *very scathing* letter to the manufacturers. Then I got distracted for a month, and neglected both the kit and the letter writing. When I came home from the first day Maker Faire Detroit I discovered this: 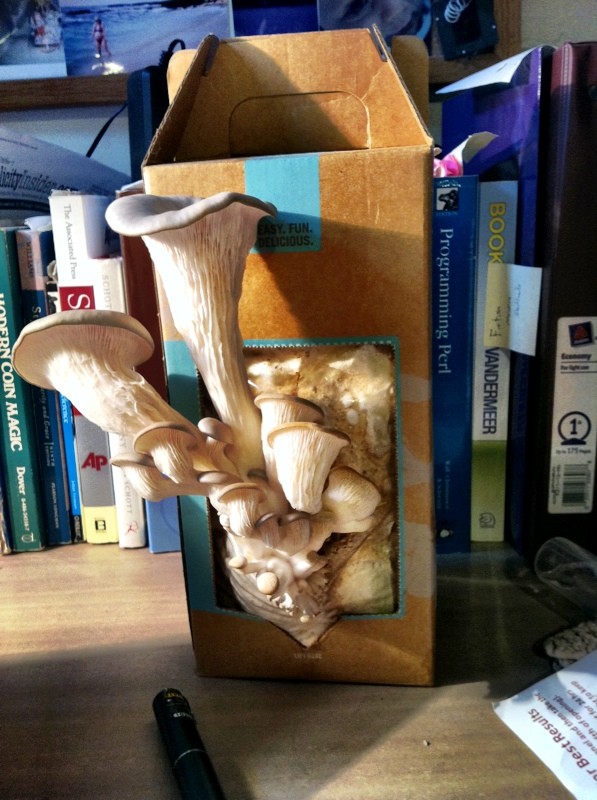 Which, in just 24-hours, developed to this:

Which was *delicious* (as promised). So, I kept neglecting the kit. It’s three months later, and the kit just put out its *fourth* batch of mushrooms (i.e., twice as many as it’s supposed to). Yes, each batch is diminished in size from that first, but seeing as how I was only promised two, this strikes me as solid performance. I rate this a *Buy.*

UPDATE: About a week after this post went up I get an email out of the blue from one of the mushroom farmers at Back to the Roots, thanking me for my sticktoitiveness. Stand up folks all around, and clearly pretty responsive to customer concerns. I score this as another point in their favor.