FROM STEEL: The Making of a Soulcraft on Vimeo

FROM STEEL: The Making of a Soulcraft from michael evans on Vimeo.

Mike Kessler (carpenter and founder of the Workantile Exchange–which is where I sit and type most days) points out:

Making the frame looks like the easy part: setting up the shop and building all of the specialized jigs before the frame is built, that is the hard part. The quality of a craftsman is in the ingenuity of his jigs– that is what determines the quality and consistency of the final product; this guy is impressive.

(thanks for the link, mike!)

Basically, these bookbinders are making a hardback cover for the device (iPad or Kindle). I was lukewarm on this at first (especially since I own neither device), but now that I’ve seen more of the craftsmanship–especially the bamboo fitting that holds the tablet in place–I’m really, really impressed. If they made a flip-top cover for the iPhone/iPod Touch (which I do have), I’d definitely be in the market (hint, hint).
Incidentally, this is what I carry my iPod around in now: Poor Mojo’s Newswire: I’m Concerned I May Have Crossed a Geeky Rubicon 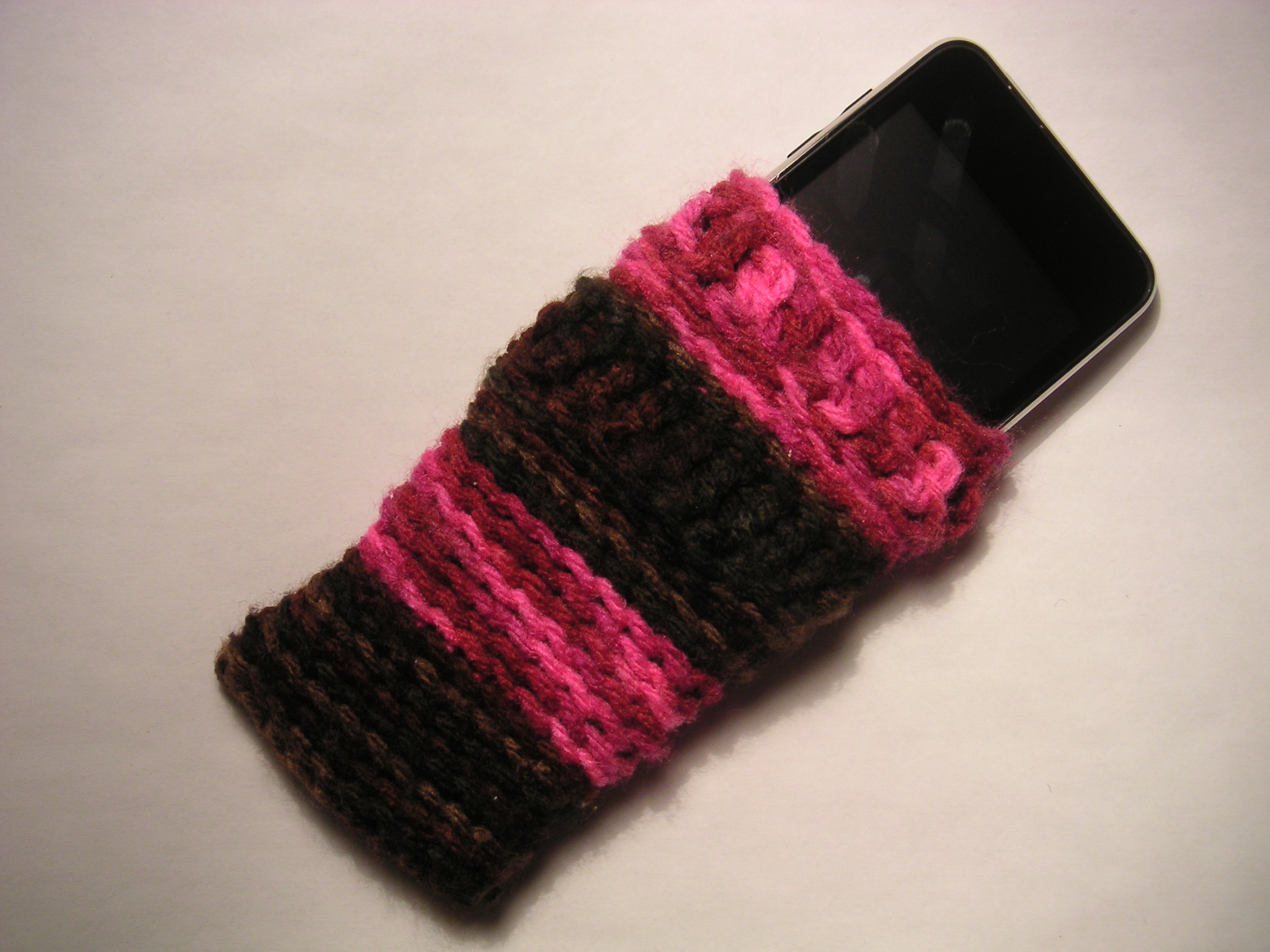 Video review of the DODOcase: 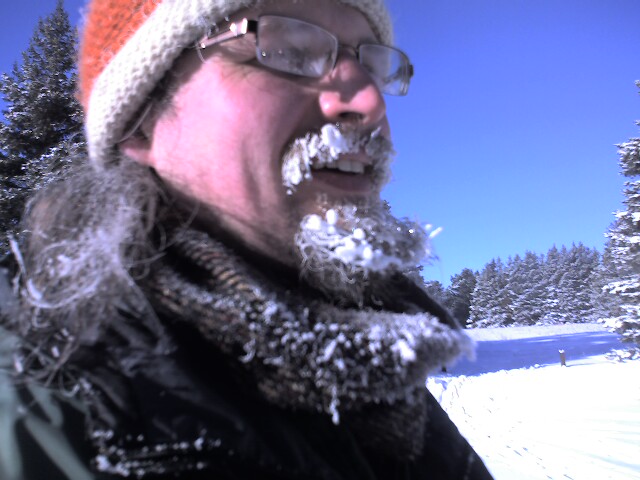 Spent the weekend near Higgins Lake, MI, visiting my parents-in-law, attending a carnival on and adjacent to a frozen lake, and cross-country skiing. When we went out this morning, it was -19 degrees with no windchill. Leaving the cottage I burned two of my knuckles on the sub-zero metal of the storm door.
That ice in my beard is my frozen breath, as is the ice crusting my scarf, and in my hair by my ear (I breath like nuts when I’m trying to regain sensation in my thumbs, toes, knees, etc.) We were only out for ~45 minutes.
Also spotted on this jaunt: Private land adjacent to the state park demarcated by 1) A large hand-painted “PRIVATE” sign and 2) a pair of deer rib cages rotted to the bone and hung ~10 feet up in the crooks of a pair of trees flanking the sign. Yes, Michigan!

END_OF_DOCUMENT_TOKEN_TO_BE_REPLACED

Wanna sew a sinister lovey for your kid or significant other? New to sewing and looking for a project to get your started? Get a taste of Snip, Burn, Solder, Shred with this sample project:

Mysterious, charming, and delicious, squid have fascinated and terrified humanity ever since Pliny the Elder reported a giant squid attack on seaside Spanish fish-brining tanks, with several dogs and fisherman bludgeoned in the melee (recounted in his Naturalis Historia, circa 77 CE). Hence, the squid is a natural subject for adorable handicrafts. . . .

LTK: What advice do you have for moms who want to tackle these crafts for boys? Is it really possible to make these items if you’ve never picked up a saw or a soldering iron?
DEN: Absolutely! First off, many of these projects were designed for kid who had likewise never touched a saw or soldering iron; everything here is within your reach. Beyond that, I’ve found that, especially with teens, a little humility goes a long way. Some of my best teaching experiences weren’t couched as “I know a lot about this, and now I’m gonna tell you,” but instead as “I have no idea what I’m doing, but neither do you; let’s figure it out together.” Working together is really powerful, especially when the ages of the people working together diverge greatly.

The author photo (which you see in the right-hand sidebar) was shot by my brother-in-law, photographer Justin Lundquist. When the cover was being laid out, this was one of three high-res photos of me that I had to offer to the graphic designer, and the only one where I wasn’t clearly holding a gun (Justin–who is also an incredible, natural shot–had gone skeet shooting with me, my dad, my other sister’s husband, and her son, and had brought along his good camera). So, let this be a lesson: If you’ve gotten most of the way through writing a book, get someone to take a decent hi-res photo of you; unbelievably, you will need it.
Justin and his business partner, Ben Syverson, have just gotten together money to start producing their Pinwide “lens.” This fits any Micro 4/3-body digital camera in place of the removable glass lens; a prototype was used to shoot this photo: There’s a few of these sorts of pinhole lenses floating around, but what makes this one super wicked-awesome is that the aperture is etched, instead of laser drilled (giving a smoother, smaller hole) and the pinhole is actually recessed back into the camera body, bringing the aperture much closer to the CCD sensor. The result: super-wide angle pics with infinite depth-of-field focus and vignetting; high-res digital photos (and video!) taken today looks just like giant, flawless old-timey pinhole shots.
It really is the best damn digital pinhole out there–both in terms of price and end-results. It’s wicked, wicked awesome.
Here’s some video, some of which is shot *inside* a pinball machine:

If you do more than a little soldering, then a pot of tip tinner/cleaner (I’ve been using RadioShack’s brand, stock #64-020) is a worthwhile investment. The heating and cooling of the soldering tip over the course of many sessions tends to corrode it–I’m a little unclear why, as I’ve gotten a lot of mixed explanations. Some chalk it up to impurities in the solder, and others to the fact that, if you tinned your tip with regular strands of solder, you’ve likely done so unevenly, resulting in a blob on one side, and an almost naked face on the other. Whatever the cause, the degradation of a soldering iron tip is *much* more pronounced when you use a cheap tip (which, by definition, is lower-quality metal) or a cheap iron (which is less temperature stable, meaning that even as you work, there are big swings in the temperature of the iron).
In any case, I’ve found that tip cleaner extends the life of a soldering iron tip by years. Here’s the skinny:

END_OF_DOCUMENT_TOKEN_TO_BE_REPLACED

David | Flickr – Photo Sharing!
(Warning, I flub the riff pretty terribly when I play it the second time, with the fuzztone engaged.)

You can build one of these, too; it’s Project 13 in Snip, Burn, Solder, Shred: Seriously Geeky Stuff to Make with Your Kids (save 35% if you use the coupon code MAKEMORE when you order; good ’til Xmas).

END_OF_DOCUMENT_TOKEN_TO_BE_REPLACED

You can’t really tell from the pics, but the shafts of these knitting needles are hexagonal, which make them *much* easier on the hands, with better control. The result: more even stitches, fewer hand cramps.