I came to steampunk writing fiction, so when I started occasionally going to cons and speaking on panels, I was caught flat-footed by the whole dress-up end of the movement–which actually seems to be the genre’s dominant facet (which was news to me, which is why it’s sorta shocking that people invite me to speak on panels). I’m not a huge dress-up guy myself (although I’ve got a childhood soft-spot for Ren Festivals, and am as impressed by bodiced/corseted decolletage as the next human that’s into ladies), but the handy-craftsmanship folks bring to their steampunk garb is eye-catching. Beyond sewing (little of which is simple), there’s a whole universe of leather-working, woodworking, metalworking, soldering, tinkering, and scavenging necessary to make these costumes. And, man, then there’s the *hats and goggles!*

I’m sort of inclined to write off the dress-up end of any artistic movement as foppish preening, but it’s been interesting to see elements that start out just being costume-ball frippery filter back into the literature. For example, you see that breather mask? As near as I can tell, these came into steampunk fashion from some backwater tribal-industrial post-Burning Man rave-scene affectation. I find them creepy, and kind of assume they have Mad Max sexual overtones. Whatever your opinion, they aren’t abundant–or even notable–in canonical steampunk lit. But I’m now seeing breathers like these show up in *stories*, the rationale being that *if* you had the Industrial Revolution lead directly into high-level computation, then you’d have exponentially increased the consumption of fuel–which was all wood and coal–and thus brought on the complete blighting of London, for example, much, much more quickly.
I spent a lot of time kicking around the merchant hall at the World Steam Expo last week, pawing fancy hats and generally making a pest of myself. Now, maybe I’m jaded, but when I’m looking at a huge display of hundreds of funky leather hats, my inclination is to say “Man, there’s some crazy Upton Sinclair nightmare of a factory in Shenzhen where 10-year-olds crank these out for nickels!” But then I ended up talking with the sales folk–who it turned out were *actual* milliners–and I was just gobsmacked: They crank these out from scratch in Fremont, OH. The company that made the pith helmets in those pics is Blonde Swan, and their janky website doesn’t even come close to doing justice to the variety of their hats, or the craftsmanship of those lids. The Universe where I’d pay $150 for a hat that *can’t* save my life or grant wishes is far, far away from here, but I’m gonna level with you: These hats are *cheap* at that price. The gal I was talking to (not pictured, sadly) was a cutter–whole days spent cutting leather to make top hats, twenty at a time. And they’ve got seamstresses there that can crank out those hats as fast as she can cut the leather. This is an all above-board, all-American operation. That there is this kind of demand for leather top-hats with brass gewgaws stitched to them, in this economy, simply boggles the mind.
Likewise, I spent a goodly amount of time talking to Abbey Manalli of Altered History, from whom I bought these patches: 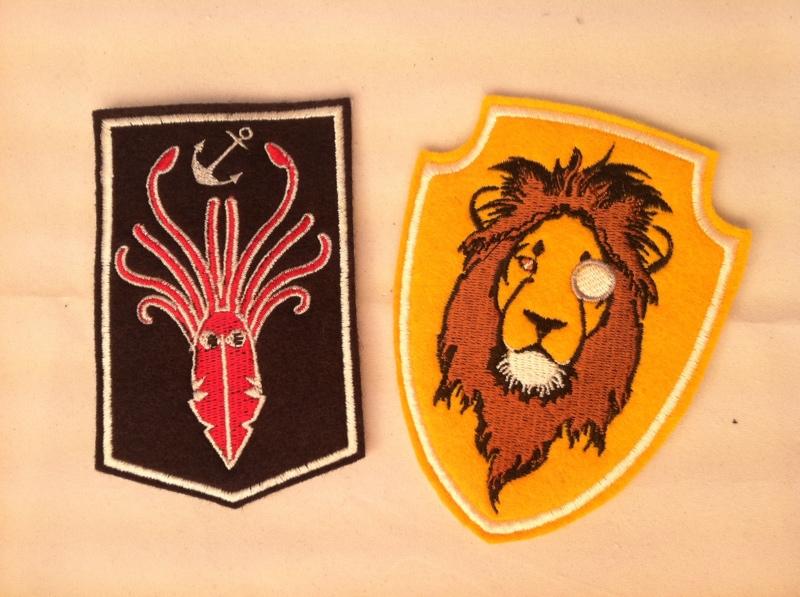 (my boy claimed the monocled lion, but I get to keep the Navy squid)
First glance: they’re nice designs competently wrought; a solid buy. But then you pick them up, and discover that they’re not your standard-issue glue-backed embroidered patches (which are sort of a post-WWII technique), but rather an embroidered design on wool felt. Why’d Manalli bother? Because that’s how insignia were made in the late 19th and early 20th Century. She wanted to be period to a period that doesn’t exist, so she tracked down the only wool felt producer in the US (located in rural Massachusetts) to source the material, and then hooked up with a crazy embroiderer in Milwaukee who was into the aesthetic, and thus willing to futz around with a material no one had used in mass producing patches since my *grandfather* (now of blessed memory) was born.
So, there’s no big point here, except for to say that there isn’t a Hot Topic for steampunk fashion yet; even if someone’s togs are strictly store-bought, there’s still a helluva lot of good ole American elbow grease[*] in the making.

[*]. Unfortunately, the last American elbow grease distillery went under in 1987, and so we’re now entirely dependent on Burmese elbow grease for all our gumption.