Back at the beginning of March this list of Chuck Jones’s Rules for Coyote-Road Runner cartoons made the rounds: 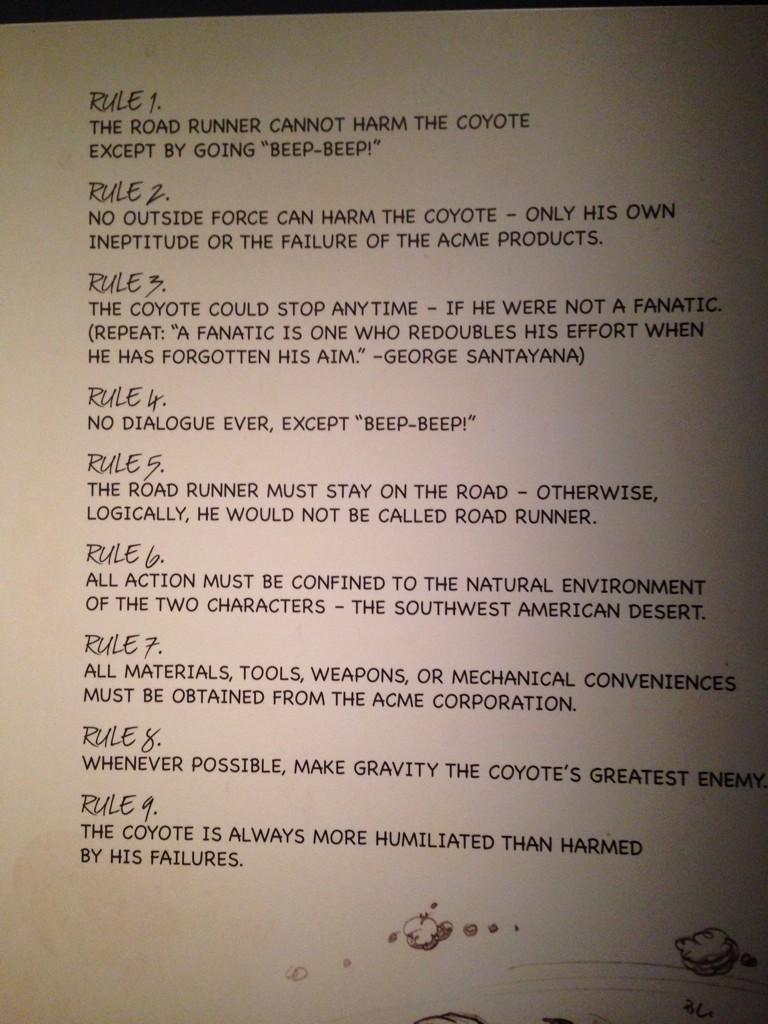 (The pic, taken by filmmaker Amos Posner, shows a display in the Museum of the Moving Image’s “What’s Up, Doc? The Animation Art of Chuck Jones” exhibit. It’s identical to the Coyote-Road Runner Rules Jones listed in his 1999 memoir Chuck Amuck: The Life and Times of an Animated Cartoonist)

There’s some question as to the consistency with which The Rules are followed, as well as their pinned-to-the-wall workaday legitimacy, but as I work through a set of hard revisions on an almost-just-about-right SF novella, I’ve been thinking about these rules–not because I’m employing any of them in my edit (I’m not), but because they embody a different way of looking at constraints[*], and I’m very fond of drafting with a fuck-all attitude and revising with a sharp blade and very narrow constraints. By hewing to constraints we drive our work towards the Graceful Universality of fairytales, Willie Nelson songs, Basho haikus, Jones’ Coyote-Road Runner shorts, and the like. Besides, even if you miss the “graceful universality” bullseye, it’s effort well-spent, since the entire target constitutes “stuff someone will pay money for” (i.e., “work that meaningfully touches people”).

Jones’ Rules have been floating around the Internet for more than 15 years, during which time the list has swelled to as many as 11 items listed (in fact, Wikipedia editors only culled back to nine following Posner’s tweeted picture, even though Jones’ canonical nine-item Rules have been in print since 1999). Interestingly, the earliest instance of the Rules swelling beyond the Canonical Nine traces back to its *first* online incarnation back in 1999, which includes this 10th Rule:

(Rule 10.) The audience’s sympathy must remain with the Coyote.

This isn’t in Chuck’s Nine Rules because it’s something he explains a few pages earlier in his memoir, while setting up the discussion of the Coyote-Road Runner Rules. he returns to the idea in his analysis at the end of the book. It’s tacked on as a 10th Rule in that ancient webpage, but it’s really the 0th Rule, the fundamental Truth: The audience’s sympathy must remain with the Coyote, and to a greater or lesser degree the Rules guide the forward energy of each story toward this goal. The Coyote is humiliated not so much by an active antagonist (that damnable Road Runner) as by his environment, by the core physics of the universe, by shoddy consumer goods, and by his own mania.

All of which is a nice reminder for me, that any part of the craft–all of the rules of thumb and editorial tricks and writing tactics and daily grinding–exist to serve the 0th Rule of the Coyote and Road Runner: You need to cultivate the audience’s sympathy for the protagonist. “Sympathetic” doesn’t mean “likable.” Likability, in my humble, is bullshit: We don’t “like” Richard III, on balance, or Hannibal Lecter, or Walter White, or Lady MacBeth, or Medea–but these are among the most compelling protagonists in Western narrative.

Similarly, “sympathy” isn’t “pity”; pity is a form of contempt. We feel superior to those we pity. But I don’t think most audience members ever feel superior to even the very disagreeable protagonists I’ve listed above, flawed and awful as they are. Why? I imagine it’s because, like Coyote, they may be failures, but they certainly aren’t quitters. We can respect that, and sympathy rests on a measure of (often grudging) respect.

Now there’s most certainly another 3k words I can put to this–especially as it applies to the modern argumentative essay and social media–but let’s stop here, with the nuts-and-bolts Write Better advice:

Or, in other words, accept the Fundamental Truth that Chuck Jones never deemed worth saying–that most artists come to see as so self-evident that it doesn’t bear mentioning:

You cannot catch or eat the Road Runner. But you always must chase.
*Amen.*

[*] I tend to view constraint solely in terms of structure as measured by I’m a length/word-count. Jones’ Rules, on the other hand, govern thematic elements and stage action. It’s a more concrete approach.