Given the recent arrest of White Power and anti-government terrorists in Michigan (and the fact that these groups had both been active in Washtenaw County), it is reasonable to worry about armed bullshit at the polls here. Although there is no known credible threat or planned actions, law enforcement here is vocally committed to protecting our free, fair, and open elections. I’m not just getting this from the letter: Over the last month I’ve been in meetings with Rep. Dingell, Sheriff Clayton, Police Chief Cox, etc. and the message has been clear and consistent: They are not playing around with any jackassery at the polls, esp. “open carry” or self-appointed “election protectors” or any other extra-legal shenanigans.

It’s extremely likely that nothing bad or weird or yucky will happen; high rates of early voting hint at a very boring in-person final voting day here in Washtenaw County. But you do not have to put up with any crap, and it’s fundamentally wrong for anyone to attempt to make you uncomfortable at the polls, let alone disrupt you submitting your ballot. WHATEVER YOUR FEELINGS ABOUT COPS IN GENERAL, HERE IN WASHTENAW COUNTY WE ARE ALL ALIGNED ON THIS ISSUE. 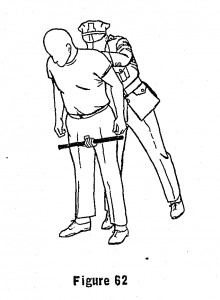 In L.A. County they call that lil number the “drunk come-along”:

‘course, this one is even more superfantastic: