At its core, this writer advice is a variation of the One True and Eternal Law:

Always take the path that leads to writing and editing more

In truth, the secret isn’t the strategy (“write more!”); that’s self-evident. The tricks are the tactics that folks who excel use to make it a tad easier to get their shoulders to the wheel.  Wanna write more? Here’s a tactic…

Advice for Writers: Use Annoyance to Fuel More Scribbling

It is very common for artists to spend a lot of time annoyed: You love a thing so much that you want to create more of that thing, and thus invest a lot of energy in honing skills at creating that thing.  Meanwhile, since you love the thing, you keep seeking the thing out. As your skills improve—and noting the immutability of Sturgeon’s Law—you’re bound to come across plenty of examples of imperfect executions of that thing you live.  Profound, near-constant annoyance is the natural consequence of this.

You can do two things with that annoyance:

PRO-TIP: Almost every working artist I’ve asked about this has landed squarely in Group #2.

This piece could be great, but it falls flat and is unsatisfying. Why? What went wrong?

The problem is in the Resolution (that’s the final 10% of the piece — for an overview of my 45/45/10 Formula for narrative, check out this blog post or this one). In any piece the Setup creates series of “open loops“ that need to be closed in the Resolution in order for the piece to feel satisfied. The open loops here include social isolation (which is introduced by Danny almost from go, and keyed to his goofy dream of singing his “I wish” songs with friends), a Twilight Zone leitmotif (evoked by the musical cues, camera work, and acting style, especially with He-Man and Lion-o), and also elements of sexual frustration.  This last item is lightly implied by mother’s nap, but really explicitly introduced by He-Man—and this is crucial—at around the 2min10sec mark, when he punches through a wall out of sexual frustration.  The 2:10 mark puts this bit of stage business at about 45% of the way through the piece, where it naturally transitions from the Setup to the Tangle (no clue what these terms mean?  Check the bulleted 45/45/10 Formula overview here).  Given both the timing in the narrative and the drama of having a character punch through wall out of sexual frustration, you’re making this issue seem really, really important.

And then you introduced She-Ra—already a sorta-kinda sexually charged nostalgia callback—being played by Arianna Grande.

So, to recap, here are the unresolved open loops:

And we’ve just brought Arianna Grande onstage: a very gregarious and sexually attractive young woman with a stunning singing voice.  The audience is gonna have certain sorta obvious expectations of the basic outline of how these loops should be Resolved.

As an audience member, I’m kinda let down.  As a writer, I’m almost fatally annoyed because they were so close to knocking this out of the damned park!

How would I fix it? It’s so simple: First, keep the Setup unchanged (that’s the first two minutes or so).  It’s a fine Setup, really. In the Tangle (that’s the next two-ish minutes), I would keep almost everything the same as well, but would strike the birthday hug gag between Danny and She-ra. (Don’t worry; we are still going to use this gag, just later, to close the skit.)

Let’s run through what we’ve got now: Same Setup (with Twilight Zone look-n-feel and Danny’s social isolation). We introduce sexual frustration. He-Man busts through the wall after Sister. He brings back She-ra. The three toys-come-alive all start trashing the joint. Mom comes in, chemistry sparks with her and the hunks. Those three leave for the hot tub. Now Danny asks She-ra for his birthday hug. We keep She-ra’s reply as written—she doesn’t like hugs; she likes to smash!—and Danny announces: “Well, I like singing songs with my friends—even if that means singing by myself!” Unashamed, he begins belting out his “I wish” song. She-ra (who, you’ll recall, is being played by a goddamned operatic pop star) is taken by Danny’s heartfelt song; she’s a warrior princess, and has never before heard the beauty of song. She begins to sing along with him—and then returns to smashing, never flagging in her song. Danny, thrilled to have a friend, keeps singing and he starts smashing the joint up, too.

The camera pulls back, swivels, and reveals a black-&-white Rod Serling impersonator (everything else is still in color). Cue Twilight Zone bongos.  Rod Serling looks dead into the camera, puffs cigarette, and delivers a Twilight Zone-style summary outro:

Boom.  That’s the skit this skit clearly wants to be.

. . . but either you agree that this is the greatest space alien The Twilight Zone ever coughed up, or we can’t be friends any more. This is my thin blue red line in the sand, folks. 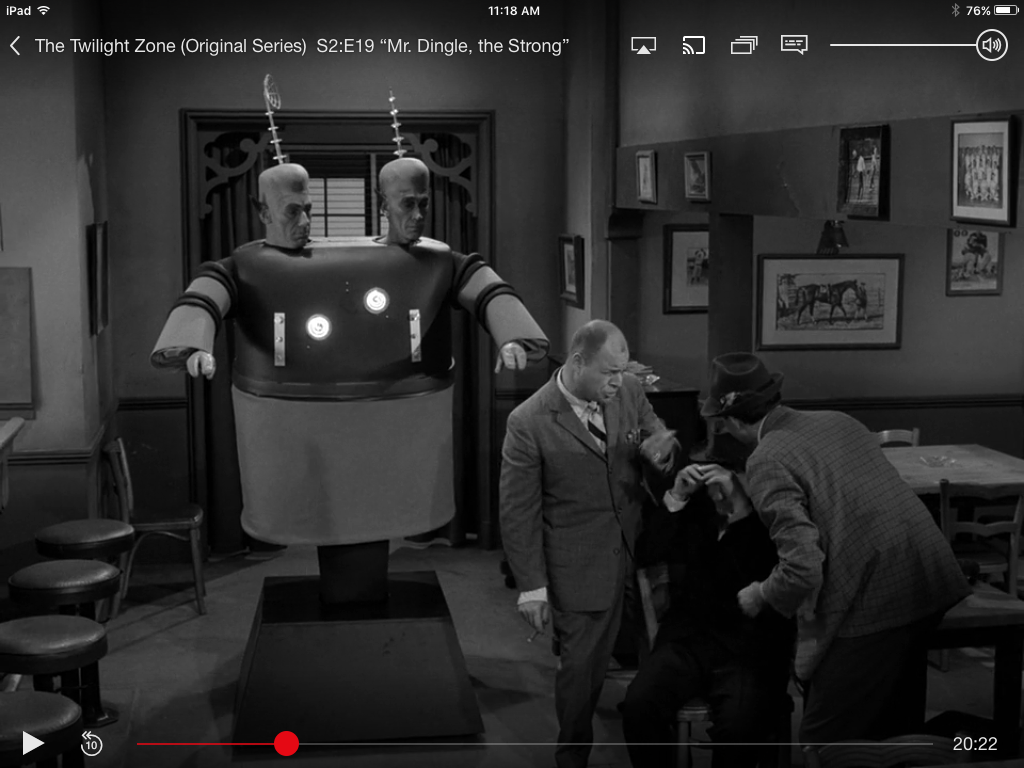 DISCLOSURE: If you wanna argue that the alien at the end of this episode is technically the better alien, you are welcome to do so